How do you try out node modules? Have you really thought about it at all? It's something I've given some thought recently. Today's post presents three options for trying out node modules with pros, cons, and recommended use cases for each.

Option 1: Install to a temporary project.

This is probably the most common method. It has existed since the dawn of time and will probably persist until the end of time because of its simplicity. Create and change to a new directory, npm i some stuff, and you're off! There are two primary avenues for trying things out with this method: the node REPL and temporary scripts on disk executed via the node CLI. Use the REPL when you're just trying out quick one-liners and use a script when you need to repeat and iterate on something a little more complex. What more needs to be said?

You may have seen the following link in the sidebar on npm:

That's a link to Tonic, a service which gives you notebooks to play around with node modules. These notebooks remind me a lot of Mathematica notebooks but with JavaScript instead of crazy math stuff. You can essentially think of them as node REPLs in your browser, with access to every version of every module on npm. You also get a host of other cool features, like data visualization, simple endpoint hosting, and the ability to share whatever you create. Additionally, module authors can declare examples for their modules directly in their package.json. 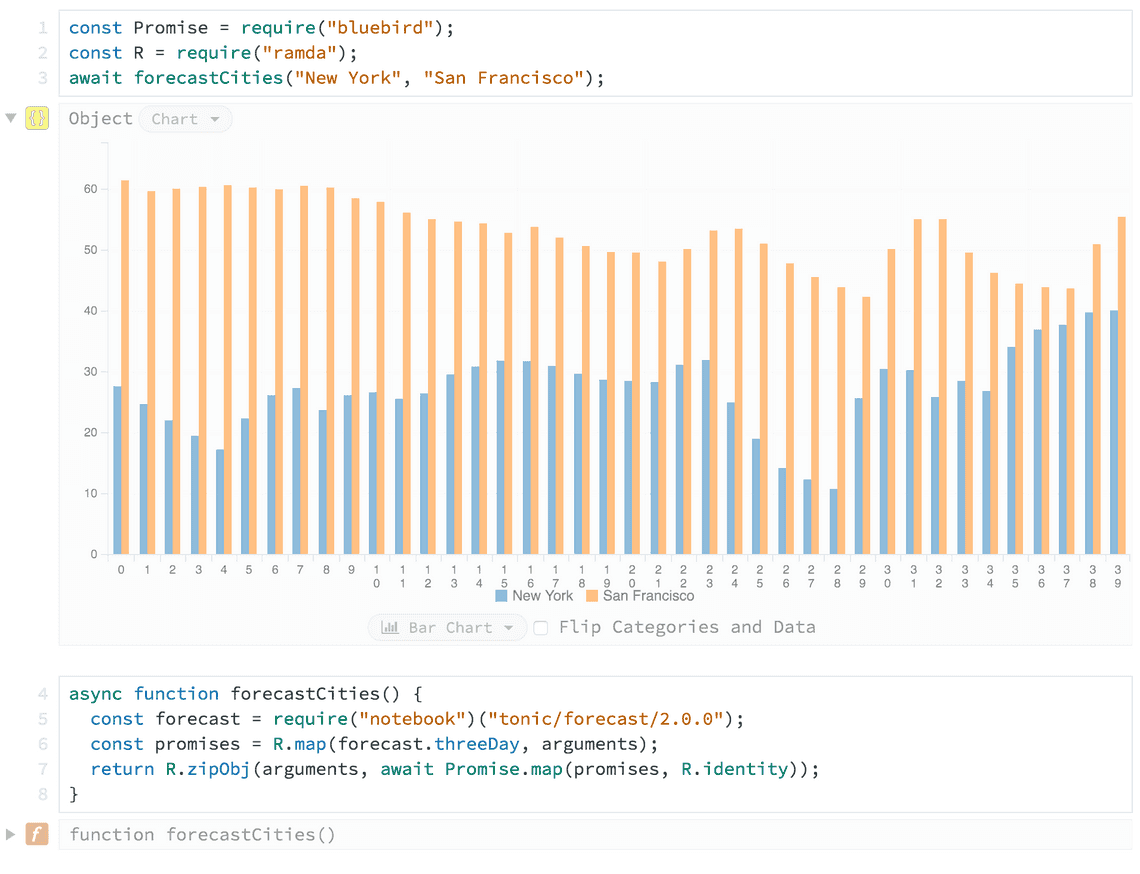 Go ahead and click either screenshot above. They'll take you to some pre-defined notebooks where you can play around. Better yet, I've embedded a notebook below where you can try out Lodash:

repl'em is basically a node REPL which lets you pre-install and require modules from its CLI. Want to try out moment? It's this easy:

You are dropped in to a REPL with a variable named moment available to you. Nice!

Want a REPL where Promise is actually bluebird? You can alias how modules will be exposed:

repl'em also lets you use _ as an alias, which the default node REPL does not:

You can also install and use multiple modules all at once:

And then you get some other stuff too, like using specific versions of modules, exposing modules' properties, and custom REPLs (e.g., Babel, CoffeeScript, etc). See repl'em for more details.

So what should I use?

This is just what works best for me, you should experiment and find out what works best for you. I've started using repl'em for my quick, one-off experiments in favor of installing things to a local directory. If I need something just a little more robust, however, like a quick script I'll be iterating on, I'll favor the temporary project directory. If I intend to share or embed something, I'll lean towards Tonic.

Did I miss anything?

Well, yeah, probably. Feel free to post in the comments down below or reach out to me on Twitter to let me know your favorite way to try out node modules.

Using Lodash as a Collection of Micro-Libraries